BOMA Nova Scotia encompasses the majority of commercial property owners within the province involved in the leasing and management of retail (including major shopping centers), industrial, and office properties throughout the province. Our members also include institutional owners at all levels of government as well. As such, our membership is responsible for a significant amount of tax base within the province’s municipalities. In 2021, BOMA represented approximately 5.0% of the province’s total assessment base, and 16% of the province’s total commercial assessment base. If we were to include government owners who pay property taxes via grants or other methods those percentages would be even higher. We also recently took an inventory of our membership’s property tax liability and square footage under management/ownership.

The following graphs detail BOMA’s representation within Nova Scotia’s commercial, and total assessment base in 2021: 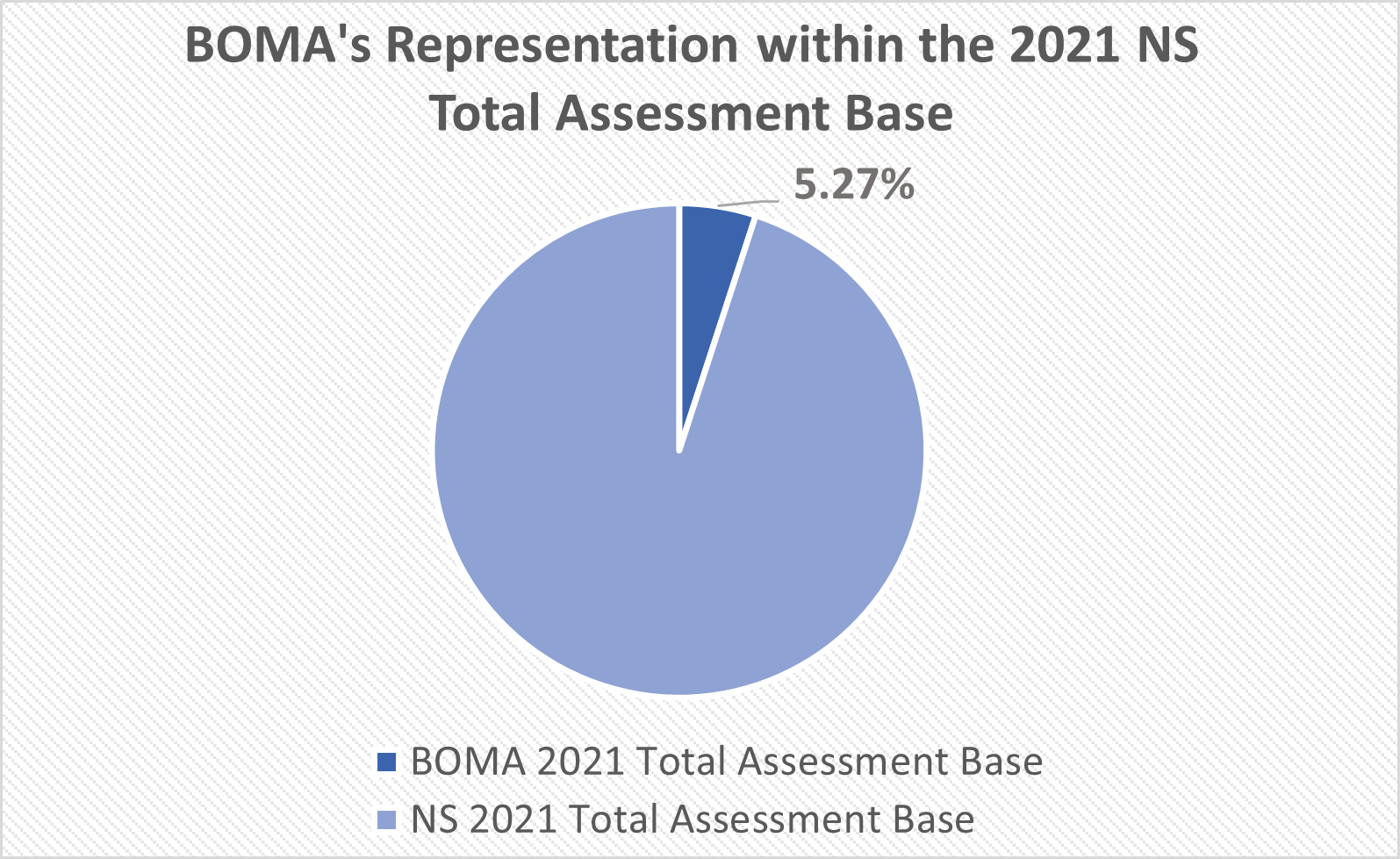 Property tax, if not the highest, is one of the top three operating expenses for a typical property’s operating income and expense statement. As such, tax rates are a great source of concern for our membership. BOMA Nova Scotia is putting forward the following three recommendations and as these are under provincial purview or at least require provincial approvals, we invite other Nova Scotia municipalities to join us in championing change as well.

All properties within the province are categorized as either residential or commercial with respect to taxation. Most commercial real estate, namely shopping centers, office towers, restaurants, industrial buildings etc. all fall under the “Commercial Class” while single family, duplexes and multi-family apartment buildings fall under the “Residential Class” of property.

Altus Group, the country’s largest property tax consulting firm, produces an annual report in conjunction with RealPac. The excerpt below shows the ratio between the commercial tax rate and residential tax rate in Canada’s largest cities including Halifax. 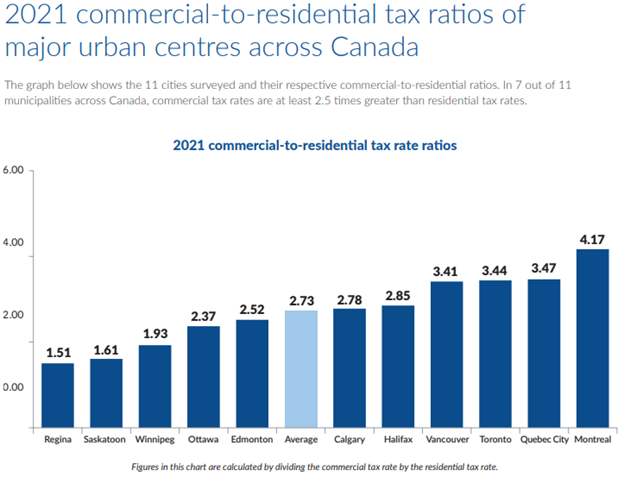 As shown on the chart below, the commercial tax rate in Halifax is the third highest in the country behind Quebec City and Montreal, and over the national average. 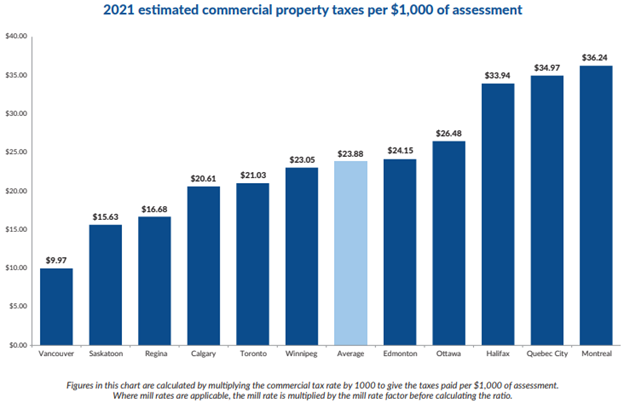 Although the city of Halifax has recently announced a significant commercial tax rate decrease totaling 1.4% over the next 2021-2022 fiscal period, the city also embarked on the following two initiatives:

HRM has been actively involved with the various commercial stakeholders over recent years in hopes of finding ways to provide relief to small business operators within the municipality. Since end of Q2 2020, small to medium sized businesses that were heavily impacted by the pandemic have been quite vocal about the advantages that “big box” retailers have over small business. The smaller businesses were often subject to complete shutdowns while larger stores could remain open for essentials. From the two proposals outlined below, it seems that City Council really does have the political will act on taxation reform with the ultimate goal of supporting small business. Item No. 11.1.2 dated May 4th, 2021 outlines the proposed taxation changes: https://www.halifax.ca/sites/default/files/documents/city-hall/regional-council/210504rc1112.pdf

In an effort to bring more stability and predictability to the business community at a time when commercial assessment increases are more than 5% over the annual commercial tax base average, the increase in assessments are proposed to be averaged over the next 3 years. The link below illustrates the mechanism. https://www.halifax.ca/sites/default/files/documents/city-hall/regional-council/210504rc1112pres.pdf

This initiative proposed by the city we find concerning. HRM commercial and residential tax rate is currently split into 3 rates as follows: The urban and commercial rates are essentially identical while the rural rate is lower given that not all municipal services are available to that sector of the municipality. The city is exploring abolishing the 3 commercial rates and replacing them with the following rates. The new rates would be split by five zones and tiers of assessed value. Please note that this example is based on the 2020-2021 fiscal year tax rates and was taken from HRM documentation.

The Five zones are outlined on the map below and can be found in Council documentation using the link below:
https://www.halifax.ca/sites/default/files/documents/city-hall/regional-council/210504rc1112pres.pdf 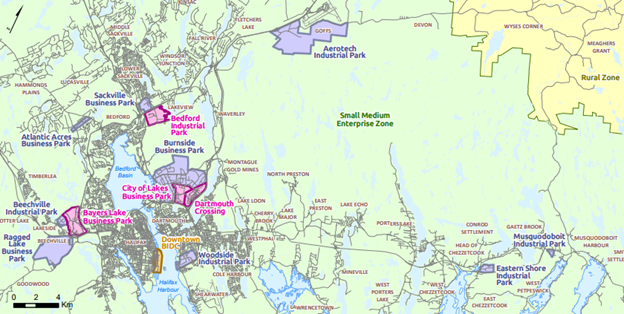 Property taxes in ALL of Canadian jurisdictions are based on some form of ad-valorem system, whereby properties that are worth more pay more in property taxes. This is the basis of a fair and transparent taxation system. As assessment authorities charged with the mass appraisal of property developed efficient methods of reflecting a more accurate current value, some segments of the tax base have been known to experience significant tax increases caused by increasing market values.

The issue became political in Nova Scotia in the early 2000’s as some homeowners, primarily seniors that have been occupying their homes for some time, felt that increasing tax bills due to higher assessed values were driving them out of their homes. Lobbying efforts were successful as the provincial government of the day enacted a law that saw eligible property taxpayers, primarily residential owner-occupiers, to be taxed on the “Capped Assessment”. Since 2004, qualified residents who own and occupy a residential property have been protected by capped assessments, with annual increases limited to the prior year CPI increase. For example, if over the prior year your assessment market value goes up by 3% due to an increase in the assessment but the CPI for the prior year is only 1%, your assessment would only increase by 1%. Since that time the Nova Scotia Federation of Municipalities (NSFM), encompassing all of 49 provincial municipalities, has been lobbying the provincial government along with other industry groups to abolish the CAP program.

Since its inception over 15 years ago, the CAP program has resulted in an inequitable spread of the tax burden to other rate payers. Here are some of the inequalities the program has delivered:

We support other industry leaders that believe the CAP program should be completely phased out as soon as possible. Given the shortfalls municipalities are facing in the post COVID-19 era, we believe the time is ripe for this antiquated program to be phased out.

One common frustration appears to be the issue of fairness; an appropriate public aspiration in our view. The first thing a taxpayer will consider when determining whether their assessment and taxes are excessive is to compare theirs to that of their neighbors. The situation is no different for BOMA members with commercial real estate.

If we take two identical retail strips, one may be assessed at a different rate per square foot than the other, the first thing our members will do is compare the assessment and hence taxes on a unit of measure (per square foot) with other competing retail strips. If a competing retail strip pays less taxes, then that puts the lower-taxed strip plaza at an advantage. Tenants will also make these comparisons when contemplating where to set up shop, as they are concerned with total occupancy costs of which taxes typically represent about 15 to 25%.

The Property Valuation Service Corporation (PVSC) is responsible for the annual valuation of all of Nova Scotia’s 634,000 + accounts and as such the authority has developed robust mass appraisal techniques in order to value a large number of properties in an effective matter. It is the most sophisticated assessment authority within Atlantic Canada with the mandate to administer the Nova Scotia Assessment Act. From a quick skim of the act, one may assume that Nova Scotia does have an Equity and Uniformity provision; section 42 of the Act states:
All property shall be assessed at its market value, such value being the amount which in the opinion of the assessor would be paid if it were sold on a date prescribed by the Director in the open market by a willing seller to a willing buyer, but in forming his opinion the assessor shall have regard to the assessment of other properties in the municipality so as to ensure that, subject to Section 45A, taxation falls in a uniform manner upon all residential and resource property and in a uniform manner upon all commercial property in the municipality.
However, in practicality, the Nova Scotia Uniformity Provision has been interpreted though the courts as the “General Level of Assessment”. The term, as interpreted by the courts, can be summarized as the total of assessments of all properties in the municipality for a given class (in the case of BOMA members, Commercial), divided by the total market value of properties within the commercial class, expressed as a ratio or percentage. Practically speaking, the general level of assessment is determined by dividing the total of the assessments of ALL commercial class properties that sold in the prior year of the base date within the municipality and deriving an Assessment to Sales ratio (ASR).

Commercial Property owners operate in a competitive space and require their assessments to be predictable, equitable, and have a uniform application. We recommend that the provincial government amend Section 42 of the Act with more concise and precise language so that assessed values are equitable with each other, and do not depend on the current Assessment to Sales Ratio (ASR) model.